Białowieża Forest is one of the world’s last primary woodlands. It is one of the few natural old-growth forests in temperate lowland Europe and has been protected for over 600 years. In 2021 we celebrate the 100-year anniversary of Białowieża National Park, Poland, which is one of the oldest national parks in the world. The QGIS community would like to celebrate that by launching the QGIS 3.22 Białowieża.

Where Exactly is Białowieża?

WHO USES QGIS In Białowieża Forest?

Forest Research Institute has been established in 1930. Nowadays, it consists of several departments and is located in Sękocin Stary near Warsaw. The Institute carries out research on forest ecology and management, including forest regeneration and protection, forest restoration and afforestation, nature conservation, forest genetics and pathology, as well as forest policy, economy and geomatics.

In Białowieża the Department of Natural Forests is placed. We study forest and vegetation dynamics, deadwood ecology, with special focus on saproxylic invertebrates, insect ecology, plant-animal interactions, biodiversity and nature conservation, long-term tree population dynamics and fire history, fire ecology, environmental monitoring, climate change impacts on forest ecosystems, and close-to-nature silviculture. To conduct a comprehensive monitoring of stand dynamics in Białowieża Forest with use of remote sensing techniques and field data from sample plots, we have been running the LIFE+ ForBioSensing project since 2014. Our resources include a rich herbarium, entomological and dendrochronological collections, as well as a large database of phytosociological relevés from Białowieża Forest and north-eastern Poland.

The Mammal Research Institute (MRI) is one of the oldest scientific institutions of the Polish Academy of Sciences founded in 1952.

The mission of the Institute is to acquire, advance, and disseminate knowledge of natural patterns and processes in order to improve the scientific basis for effective nature conservation activities and sustainable development.

Białowieża Geobotanical Station (BSG) is a scientific unit of the Faculty of Biology at the University of Warsaw based in Białowieża since 1952.

Aside of the traditional research scope of geobotany we carry studies on plant-animal interactions, functional ecology, climate change effects and links between biodiversity and human wellbeing. Our team has been continuing several long-term projects, started in 60ties and 70ties of the 20th century, where data on plant phenology, undercanopy climate, wild boar activity, ground water levels and biodiversity of several groups of organisms have been collected on permanent plots. Many studies during last decade were carried on the exploratory set of research plots established ten years ago to study influence of stand biodiversity on functioning of forest ecosystems. Similar exploratory platforms are available also in Finland, Romania, Germany, Italy, Spain, France and Belgium.

The Institute of Forest Sciences, Białystok University of Technology

The Institute of Forest Sciences of the Białystok University of Technology (IFS BUT) is the successor of the unit established in 2000.

IFS BUT conducts a wide range of researches, especially in the field of the use of forest products and protection of forest ecosystems, applying a modern laboratory base.

The leading area of IFS BUT research is the acquisition and application of active substances from fungi and plants as ingredients of potential drugs, supplements and additives used in medicine, veterinary, forestry and agriculture. Scientific activities in this area led to the creation of an innovative project on a European (and probably also global) scale, which is Fungi Extract Bank (https://fungiextractbank.com/en/) – a collection of extracts from several hundred species of macrofungi Macromycetes. The Institute realizes various studies on changes in the ecosystems and forest environment and their adaptation to contemporary climate changes. The Institute also conducts research on the selection, chemotaxonomic and genetic diversity of the silver fir Abies alba in the stands of the Białowieża Primeval Forest.

GIS software in IFS BUT is used to develop numerical maps, spatial analyzes and planning of nature protection, especially for the needs of national parks, Natura 2000 mainstays and nature reserves, especially for:

The Park (BPN) is taken to have been founded in 1921 – the year its predecessor, the Rezerwat Forest Sub-District, was first established.

The area was renamed “The National Park at Białowieża” in 1932, being reinstated after the War (in 1947) as Białowieski Park Narodowy.

With good reason, the Park’s symbol is the European bison or wisent, our continent’s largest land mammal. For the free-living lowland form of the bison had its last refuge right here – up until 1919, when it became extinct. Happily, it was also at Białowieża that a successful reintroduction attempt was launched. Today the Forest supports the world’s largest remaining free-ranging population, of more than 700 animals on the Polish side (with a second herd present across the border in Belarus).

BNP comprises two territorial units, i.e. the Rezerwat Protective District (together with the heritage Palace Park) and the European Bison Breeding Centre (with breeding reserves and the Show Reserve).

QGIS in Białowieża National Park is the main GIS software. The Park has mainly vector data on animal and plant monitoring, which are collected also as a part of scientific research.

Scientific Department of the National Park „Belovezhskaya Pushcha” has been working since 1940 and resumed operations in 1946 after the war. Since 1948, observations of weather conditions have been carried out at the meteorological station. In 1952, a network of permanent plots began to be set up for  long-term study of the dynamics of successional processes in forest stands. 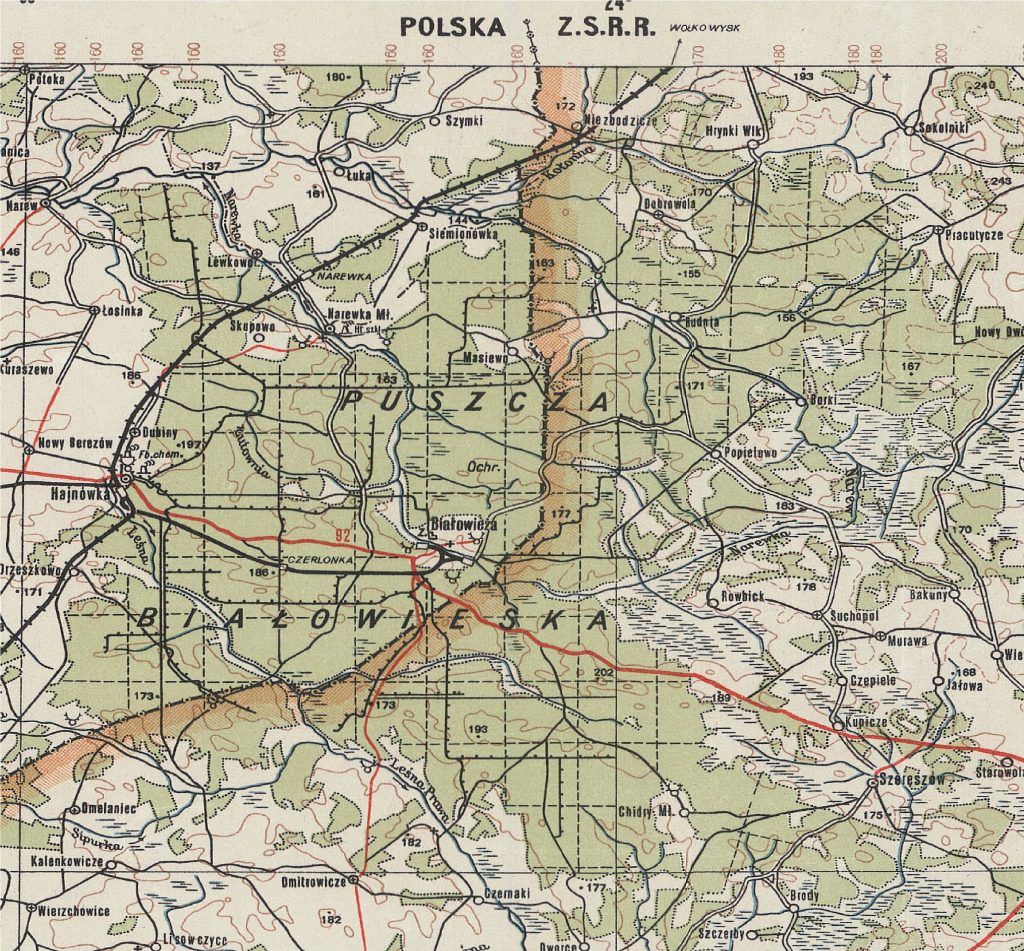 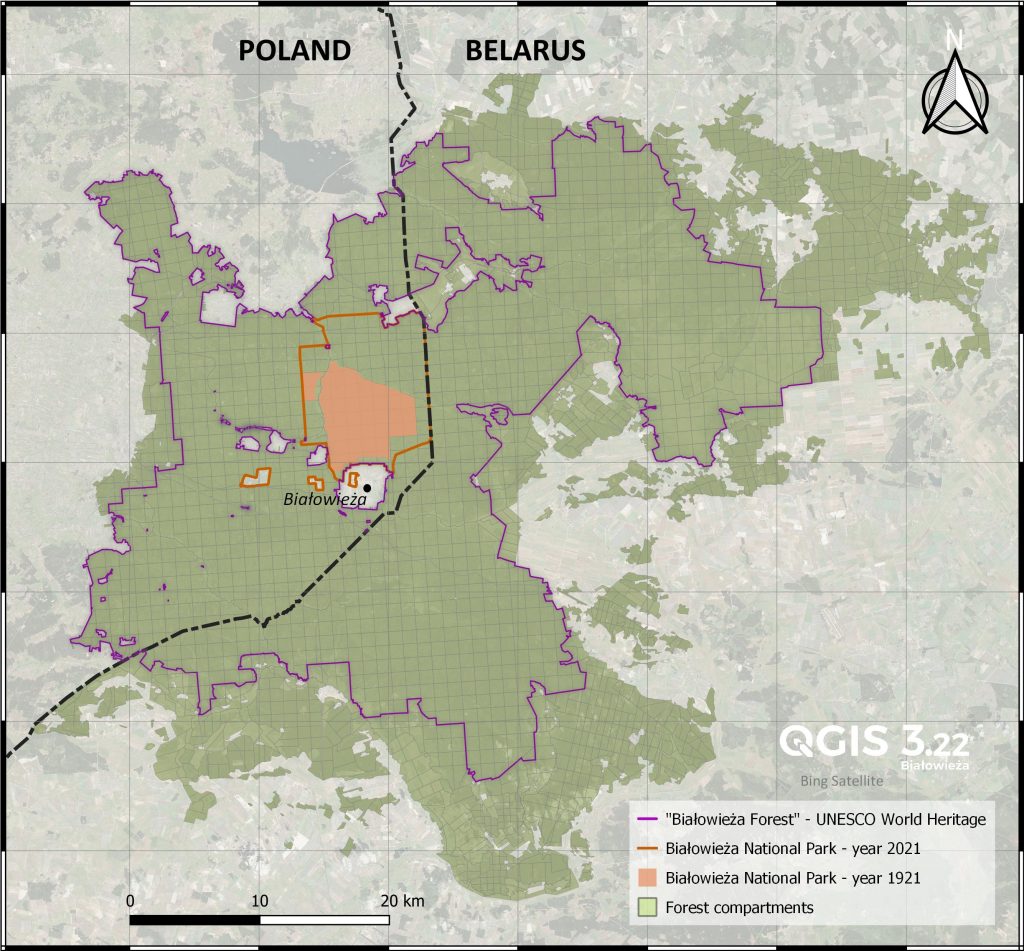 The data is open and can be used free of charge. However, if you wish to use the data, please indicate the source of the data mentioned below.

Source of the data

Airborne laser scanning (ALS) data are valuable materials that reflect the terrain topography under the canopy of a forest stand and are used to determine many tree and stand characteristics and analyse forest structure.

Hyperspectral imaging provides a very wide range of possibilities in the analysis of plant species composition and condition. During the project, high-resolution hyperspectral data were acquired (spatial resolution ≤ 2.5 m in the visible and near-infrared and ≤ 5 m in the mid-infrared).